Producer, Arts Manager and project management professional Tea Stolt de Glanville FRSA has commenced work as the new producer for Artists O in May 2021. Artists O received 32 applications for the position of their second, part-time producer, a number that exceeded our expectations. The applications were diverse and of high quality, which made the selection even harder. Many great applicants did not get the chance to work in this position, as only one could be appointed. We want to send a warm thanks to all the applicants and wish Tea success in her work. Miia Kallio (ceramic artist) continues working for Artists O as the society’s other producer.

Tea Stolt de Glanville has previously worked as Programme Director for Arts & Culture at the Finnish Institute in London (now known as the Finnish Institute in the UK and Ireland), as EU Project Manager and Producer for Experimental Productions at Media Lab Helsinki at Aalto University, and as Advisor for Grant Programmes at the Nordic Culture Point, a Nordic Council of Ministers’ organisation. Stolt de Glanville has extensive experience of the arts and cultural sector and of the cultural and creative industries. She is particularly interested in and has a focus on work that includes aspects of international cultural cooperation, cross-cutting collaboration between the arts and sciences, and of research, innovation and development.

Tea will shortly be gaining her MA (Humanities) in Culture and Communication from the University of Helsinki, where she has specialized in Nordic cultural and linguistic phenomena. She has also completed the United Nations University Equality Studies Training Programme (UNU-GEST) certified course Nordic trends in Gender studies at the University of Iceland as part of the joint educational programme of the Nordic University Hub ReNEW. Tea holds an undergraduate Degree in Media (Communication and Fine Art), with a specialisation in Arts Management. She has also studied Art & Design at Chelsea College of Arts and Architecture at The Bartlett, University College London. In her spare time, Tea remediates her audio-visual synaesthetic experiences – known as chromaesthesia or “sound-to-colour synaesthesia” – through light design and performative light art – an artistic practice of hers for more than 20 years.

Tea Stolt de Glanville has held several positions of trust and she’s been especially active in promoting the role of (New) Media Art and Digital Culture in Finland, starting in the early 2000s. In January 2019, Stolt de Glanville received the award Fellow of the Royal Society of Arts (FRSA) and thus became a member of the British RSA (The Royal Society for the Encouragement of Arts, Manufactures and Commerce) – and of a global Fellowship community of changemakers, innovators and entrepreneurs. 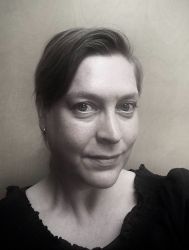